While I was growing up, somehow I always had this idea that my childhood was difficult, not so happy and that others had it much better, much easier. Over the years, something said, a photograph, a smell, a color, a taste, or a passing image in my head, would trigger a recollection that is like a gift. Gradually, I started to see a more balanced picture, that it was not all bad. There were also heart-warming, joyful and genuinely happy moments.

Last week, watching a Thai short film, ‘Giving’, making its round on Facebook, jotted my memory. To an incident, a lifetime ago. I was barely ten years old. On the rare occasion I was given pocket-money. Twenty cents, I think. When I strayed to a provision shop that sold, among other things, movie paraphernalia. I was immediately intrigued. I saw a picture book on Shaw Brothers movies. I pointed excitedly at it. The shopkeeper was an old man. When we were that young, anyone above 30 was old. I think he was in his 60s. He took down the book, wrapped it properly and handed it to me. I passed him the money I had. He looked at the amount. There was something in his eyes. Hesitation. Deliberation. For a brief moment, our eyes met. His knowing. Mine unknowing. I happily took the book and left. Years later, I would find out the book cost over a dollar then. 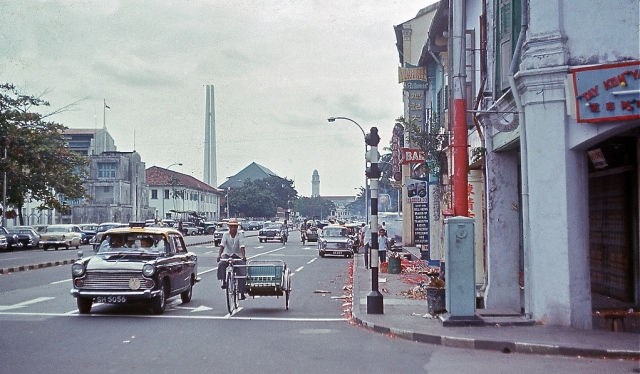 I remember being bullied in my neighbourhood as a child. Sometimes, an older boy walking pass, would knock my head. Hard. I didn’t cry. But it would eat into my self-esteem and confidence. Yet on this day, an old man, looking at me and my excitement over a movie picture book, showed me a kindness I could not have comprehended. I have tried to remember his face. On this other day, as an advertising executive in my late 20s, I was driving out of the People’s Association with a colleague. I took a wrong turn and found myself in Geyland, the place I grew up as a child. Just like the movies, there was a panning shot of an old man cycling across my car window. He was peddling household wares; brooms, mops, basins, pails and cooking utensils. He was balancing his tricycle which was overloaded with his merchandise.

This old man reminded me of the shopkeeper in the provision shop many years ago. I drove ahead of him. Parked at the side. Got out and waved at him. He looked uneasy stopping on a busy road. I told him I needed a basin and a pail. He untied the items. I took them. I looked at my wallet and told him I had no small change. Just big notes. He looked irritated. I pushed a hundred-dollar note into his hand. He got angry at what he could perceived as arrogance. I turned and walked away before he could react further. I put the pail and basin in my back seat and drove off quickly. From my rear view mirror I saw his anger was gone. I could not make out his expression. But he looked tired. Maybe with some extra money, he could rest for a few days. I was paying it forward. For the movie picture book. Which could have started my passion in movies. The two men in two separate times of my life. Thank you. For selling me the picture book way below cost. For the opportunity to pay back with the pail and basin. The universe knows I owe a lot more to the many many who have shown me kindness one way or another. I will continue to pay forward…

1 Response to Paying It Forward…