Hokkien Mee And A New Life 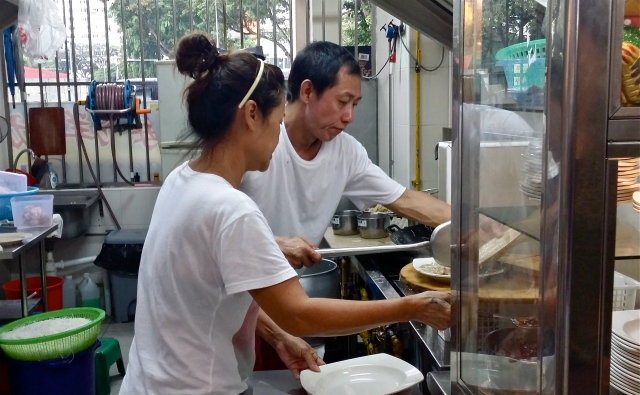 While I was driving, a food blogger was talking on the radio about an authentic ‘old school’ Hokkien Mee stall. How this man uses two ladles to toss the noodles up in the air till you can smell its aroma. How he uses Sua Lor prawns instead of farmed tiger prawns. How he adds pork belly, an ingredient a lot of stalls omit citing many customers do not want to eat fatty meat. How the noodles and beehoon are vigorously fried in the wok till there is a smoky charred flavour. How the personally chopped garlic is fried in lard till it is fragrant, then the stock is added and the wooden lid is placed over the wok to trap the aromatic steam. And how it is complete with the ultimate visual cue of authenticity, the Hokkien Mee is served in Opeh leaf. Then the blogger said something else. This man is turning over a new leaf. He is turning over a new Opeh leaf, if you will.

This man has been in and out of prison and finally decided to start life anew, setting up this Hokkien Mee stall with his ex-wife and son. This story stayed in my mind, and danced in my heart. Is it a story of redemption? A tale with a yellow ribbon tied around it. Is it a story of food? Recreating the taste of the Hokkien Mee we grew up with. I decided to check him out. And while I am at it, to taste his Hokkien Mee. Armed with my GPS, I drove bravely to Toa Payoh Lorong 4, Block 92, #01-264, Kim Keat Hokkien Mee. It was not difficult to find, an unassuming corner food court. Before long, I found myself seated next to an equally unassuming Mr Lee Kim Keat, an ex-convict, whose story spans over four decades. Someone who rose to become a gangster chief of ‘Hong Ong San’ in Toa Payoh, involved in drugs, illegal gambling and womanizing.

At the tender age of 15 in 1975, Lee was caught for armed robbery and sentenced to two years detention in a Boys Home. Ironically it was there he connected with the darker sides of society. When he came out, he met the girl he would marry in 1978 before he turned 21. By 1980, his son was born. He would discover new income avenues, including illegal hawking. Then he started getting into drugs, going in and out of the Drugs Rehabilitation Centre. In 1985, at 25, he faced his first jail sentence. In 1998, at age 38, he would start a ten-year jail sentence for drugs and other crimes. Before this, he had divorced his wife and found a new female companion. He would spend a total of 6 years and 9 months in jail. When he came out in 2005, he was 45 years old. His female companion had faithfully waited for him. They decided to be together again.

2006 was an ominous year for Lee. Over a small misunderstanding, his companion committed suicide during the Chinese seventh month. He was in shock and drifted more deeply into the world of crime and drugs. On September 1st, at age 46, he went back to prison, this time for an eleven-year sentence. He would serve 7 years and 5 months. He was released on 17th January this year. He is now 53 years old. He has one son, two step daughters and five grand children. His own parents have passed on. They did not play a big role in his life. He is the eldest in his family, with two brothers and two sisters. His second brother is in jail. His two sisters are married, one of them stays abroad. His youngest brother attempted suicide last month, survived a fall from the 8th floor and is now recovering in hospital. These are the sordid details of the life of Lee Kim Keat.

We have all experienced a time when we felt we were sinking. Whatever we tried to hold on to was not strong enough and we found ourselves going down, deeper and deeper. Looking at Lee, I thought a great part of his life must have felt like a free fall. There was nothing to break his fall. Talking to me, he looked straight into my eyes. I get a feeling he was telling me his life story without any filters. He was matter of fact, there was no dramatisation over the most severe or saddest episodes. What made him want to turn around? To turn his back on a life of crime and a life behind bars. He told me his turning point came at the turn of the decade. He became closer to his son and daughters. When they visited him in prison, they would relay words of concern from his ex-wife. About this time, he was introduced to the Christian faith. He decided not to let those who loved him down. More importantly, not to let himself down.

He started to make plans in jail. One of them is running a Hokkien Mee store. In the mid 1980s, as a young man, he had learned to cook Hokkien Mee the traditional way from a master in Toa Payoh, Block 75. His family then set up the Heng Heng Hokkien Mee stall at the old Toa Payoh Interchange Food Centre. It closed when he went in and out of prison. This year, during the Chinese New Year reunion dinner, with his ex-wife, his children and grand children, he felt a rare warmth that brought him back to the days he cooked Hokkien Mee with his family members. A time when his wife and son-in-law would help him at the stall. He decided to proceed with his plan, looked up a friend who owns the food court. With a cheap enough stall rental, there was no turning back. Now, it is heartening to see him at the wok, with his ex-wife and son by his side. His daughters and grand children occasionally visit them at the stall.

His stall is almost two months old. He has a new dish. Claypot Hokkien Mee with roasted pork. He told me their chilli is home-made to add an extra zing to the dish. On 30th March, he was baptised. I told him he seems to have left his past life firmly behind. He agreed with an easy confidence that is reassuring. As I write this article, I realised throughout our interactions, there is an amazing absence of bitterness. If there was regret, it was spoken for and dealt with. And there is also no blame. Lee does not blame anyone, including himself. He accepts what he has done wrong and the price he has paid for his deeds. There is no heaviness. Instead he is calm and jovial, appears healthy and focused. His ex-wife seems happy. He said he looks forward to his son’s wedding and cheekily joked about ‘chasing’ his ex-wife to marry him again. Maybe it can be a double wedding. As I write, I think this is a delicious story of redemption. 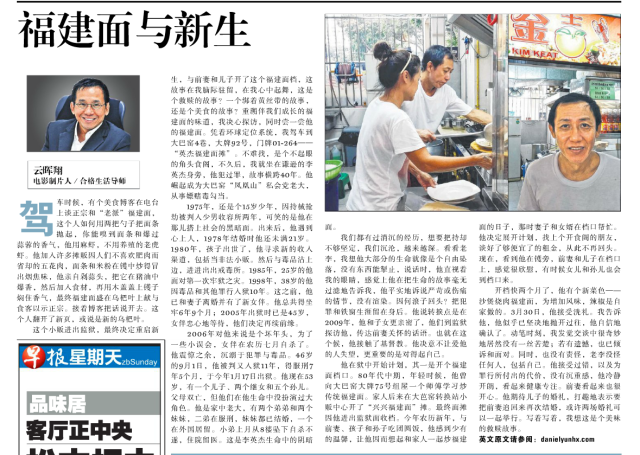