I had assumed everyone knows Ang Peng Siong. Until I mentioned his name to a 21-year-old and did not get the reaction I expected. I asked this young man if he was familiar with the music of ABBA. The reaction was similar. To a whole generation of Singaporeans, Ang Peng Siong was arguably the first poster boy of swimming, nicknamed Asia’s ‘Flying Fish’, idolised and the source of inspiration for many. It was a time when our nation was coming into its own, when the bread-and-butter issues of the 1970s were less pressing. In 1982, Ang Peng Siong became the first, and since then the only, Singaporean to hold the world number one ranking in the 50m freestyle with a time of 22.69 seconds. He was awarded the ’the world fastest swimmer’ title that year. He would go on to represent Singapore in world events, including the 1984 Los Angeles Olympics and 1988 Seoul Olympics.

Last Saturday, from the business district to the heartland, in homes, coffee shops, offices, shopping centres and clubs, Singaporeans held their breath for 50.39 seconds. When they exhaled, an Olympic record was broken. By a 21year-old Singaporean. On the podium, with the gold medal hanging from the broad shoulders of Joseph Schooling, grown men and women started to cry across the island as Majulah Singapura was played for the first time at the Olympic Games. And for the first time, a new generation of Singaporeans saw how sports can unite a nation with pride, how sports can knit the multi-racial and multi-cultural fabric in a way they have never experienced before. From that moment, Singaporean boys and girls will take for granted that it is possible to win at a world event. A glass ceiling was broken. Young Singaporeans will work harder, push further and dream bigger.

Two days ago, I called Peng Siong for a chat. He suggested a cafe near the Farrer Park Swimming Complex which is almost his second home, a place where he set up the APS Swim School. When he came, I was again reminded of how big he is and how his demeanour puts people around him at ease. Someone who knows him describes him as a gentle giant. Up close, beyond the he-man affability, his face belies the strive, the tribulations of a sportsman who is perhaps born a decade or two before his time. What are his personal feelings of this Olympic gold medal that has stirred an entire nation? What are his insights on some points of discussion which have heated up since the win – the money, the training, the extent of sacrifice needed. In short, the time and resources required to train a winning Olympian. And for the men, there is the other contentious issue of National Service deferment.

Peng Siong, I think, is happier for Schooling than many Singaporeans. He knows the sacrifice. But mostly, he knows the odds. His personal journey as an Olympian was, in his words, a painful experience. When he was 17 years old, he was the only Asian who made it to the finals of the 50m freestyle in Hawaii, the games organised by the Americans who boycotted the Moscow Olympics in 1980. He was then awarded a sports scholarship which based him in the Huston University. In the 1982 Asian Games in New Delhi, he won the gold in the 100m freestyle. At the Los Angles Olympics in 1984 he competed in the 100m freestyle, winning the ‘B’ consolation finals. He was ranked fourth in the World Swimming Championship in Madrid in 1986. Just when he was peaking, he was drafted into National Service at the end of 1986. He was physically fit for his Basic Military Training in Pulau Tekong but it was tough. When his fellow recruits were asked to do 50 pushups, he was asked to do 200 pushups. For someone who trained in water for years, the military exercises exerted a toll on his psychical being. In an 8km route march, he was down with heat exhaustion.

After BMT, he went on to train as a naval officer. Here he would collapse from pneumonia and was hospitalised, his body finally giving way to the months of accumulated military training. It was at this point that he asked to be deferred from National Service for the Seoul Olympics. He spoke to his Commanding Officer who tried to discourage him. On his behalf, the Singapore Amateur Swimming Association, SASA, appealed to Mindef, which conceded to a six-month deferment. He was sent along with a handful of swimmers for intensive training in the States. The Seoul Olympics in 1988 was especially significant because it was the first time the 50m freestyle was introduced in the Olympics. Ang Peng Siong would finally get a chance to compete in a swimming event almost tailored for his body. In the heats, he clocked a time which placed him in the ninth place. He had missed the finals by one place.

While a miss is as good as a mile and in the annals of Olympic history, there are many athletics with more compelling and heartbreaking stories, this missed opportunity was almost impossible for Peng Siong to bear. He broke down. And he would cry when he related this episode in his life. Now he has turned it around. On Saturday morning when Schooling won the gold, the first thought that crossed his mind was – it is about time! From 1998 to 2012, he was Singapore’s Swimming National Head Coach. Today, he lives a very disciplined life, to be physically fit to train his swimmers. The Straits Times ranked him fifth in the list of Singapore’s 50 Greatest Athletes of the Century. But it will be his personal experiences that Peng Siong will bring to bear. He believes every athletic wants to represent and make his country proud. Therefore every athletic with potential should be given a fighting chance.

In the training of a winning Olympian, he explained the need for a clear pathway for training. The period for this pathway should be two Olympic cycles. And this pathway should not be interrupted. He believes a Singaporean male can still serve National Service in his 30s. When a coach spots an unmistakable potential and a hunger to fulfil this potential, besides the crucial support of the family unit, the system must feed this hunger so that this athlete has the fighting chance. In Schooling’s case, when his potential was spotted before the London games, whether he wins at the Rio games, his path should be planned with no disruption till the Tokyo Olympics in 2020. Peng Siong’s 50m freestyle record of 22.69 seconds stood the Singapore National record for 33 years until Schooling broke it at the 2015 SEA Games. So his win in Rio is special to Peng Siong.

Singapore coaches, Peng Siong feels, should be accorded more status and respect. He is heartened by the incorporation of the Committee Of Sporting Singapore, COSS, in 2000 which instituted many policies to help the young sportsperson. Ultimately, in cultivating more winning Olympians, Peng Siong points to the education system and the priorities of our society. Our younger students fare better in sports. As they grow older, the realities and pressures of societal norms start to distract the discipline to train. All the talk of the need to be financially independent to pursue the Olympic medal is not as real or as pressing because educational structures with scholarships can help. The focus is still on building a culture in our society where a young Singaporean can dream to win on the world stage and where there will be enough people and resources to help build a character with the competitive spirit to make this dream a reality. 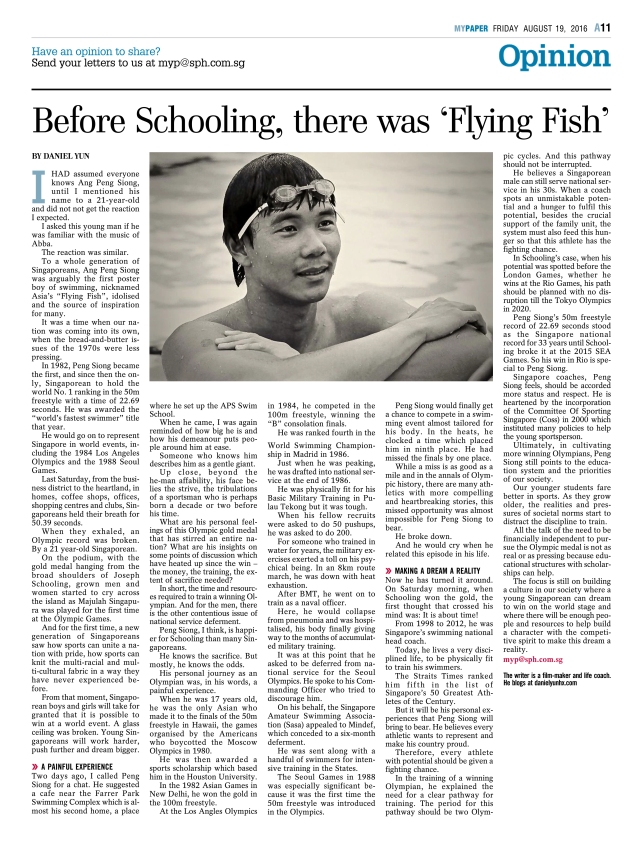 This entry was posted in About Singapore. Bookmark the permalink.

7 Responses to Ang Peng Siong And The Olympic Dream